Madrid’s Plaza de España is a node of basic communication in the capital, since the various arteries of the city converge there, like Gran Vía, Princesa Street and Cuesta de San Vincente.

This huge square was built in the 20th century, as a true testament to the expansion of Madrid that took place back then. And currently it is a large space of nearly 40,000 square metres in which various examples of the city’s modern architecture can be seen. 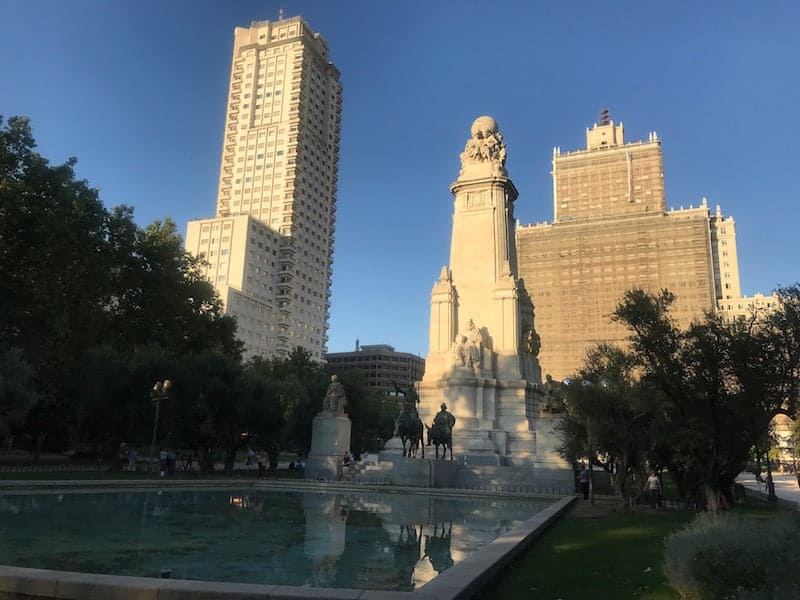 Overall, Madrid Tower, with its height of 142 metres, stands out among the rest. When it was built in 1957, it was the tallest building in Spain and the largest concrete building in the world. Clearly, today it no longer has such accolades, but it is a good example of historic and artistic development that was taking place at the time in the country.

The second building of interest is the Spanish Building, which reaches 117 metres high and is easily identified by its staggered silhouette that distributes its 25 floors into four different widths. It was built slightly earlier than Madrid Tower, and both formed the most emblematic pair of skyscrapers in Spanish architecture.

Much older is another building in Plaza de España. It is Casa Gallardo, which is located on one of the corners of the plaza. This building is one of the few examples of modernist architecture in Madrid. And on the opposite corner is the Real Compañía Asturiana de Minas building, which was erected between the years 1891 and 1899.

However, the characteristic image of Plaza de España is the sculpture in its centre. It shows the figures of Don Quixote and Sancho, surrounded by gardens, and it was the homage that the city made in 1915 to commemorate the third century since the full publication of the works of Miguel de Cervantes.