Puerta de Alcalá is possibly the most symbolic monument of Madrid, since its shape and history are highly representative of the city. 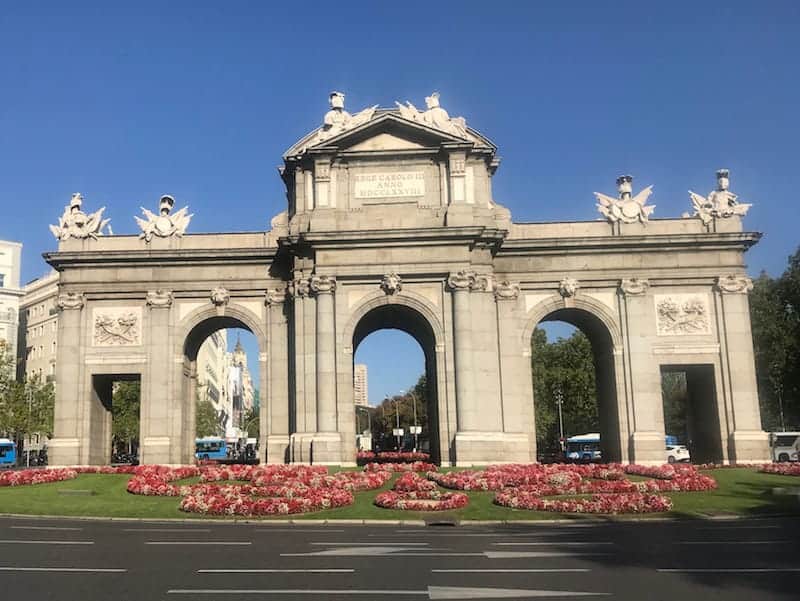 Puerta de Alcalá was built in the year 1778 under the direct order of King Carlos III, who specifically chose the Italian architect Francesco Sabatini, who was living in Spain. The gate had to replace a previous one, and had to be a monument of its age that would exemplify the development that was taking place in Madrid at the time.

Therefore a gate model was chosen based on the triumphal arches of the Roman Empire, which was previously imitated in other European cities like Berlin or Paris. It was meant to create a monumental entrance to the village and to serve as the first contact for travellers arriving from the northeast of the peninsula and from France.

In fact, if the two façades are compared, it can be seen that the most monumental would bid newcomers welcome.

The Neo-classical style was selected for this construction made entirely from superbly carved stone. And the result was a gate with five openings, of which the three central ones take the form of an arch, and the two extremes are flat or lintel. But in addition to its architectural shapes, it is also very interesting to note the sculptures made by artists Fransisco Gutiérrez and Roberto Michel in order to decorate it and give it substance.

On top, the royal coat of arms can be seen flanked by two figures. One of them is the female representation of Fame, and the other is a child who symbolises the Genius. Below this there is a large plaque with the Latin name of the king, Rege Carolo III, and the date on which it was built. On the cornice along the side, four more sculptures appear, which represent the four Cardinal Virtues: Temperance, Strength, Justice and Prudence.

It is a declaration of the principles that governed the rule of King Carlos II, a monarch of the Enlightenment itself.